Many weeks ago I cracked open Green Henry by Gottfried Keller at the kind insistence of Amateur Reader. It’s been a tough slog and I’m only halfway through, a slog in part because of the book’s burly size but mainly due to the mish-mash form of the novel. A challenging and vexing read, Green Henry is a dyed-in-the-wool Frankenbeast, a kunstlerroman stitched to a bildungsroman stitched 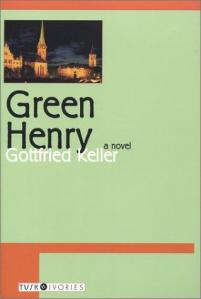 to a novel of ideas stitched to a fictional memoir. In addition to a genre identity crisis, Green Henry struggles to impose order on the growth and development of our protagonist Henry as he travels from childhood into the realm of art, love and manhood. Some times it’s easy to follow his progress from one chapter to the next. But many times a chapter is a narrative cul-de-sac or evolutionary dead-end. This doesn’t detract from the chapter necessarily. It’s just that it lacks continuity. Instead, the chapter just hangs there on its own, a vibrant portrait, a self-contained painting. The comparison to painting isn’t incidental, by the way. Henry’s great passion is to become a master painter. This leads to another feature of the novel that is as distinctive as it is perplexing. One’s never quite sure if you’re in the hands of a novelist who desires to be a painter or a painter who is in fact a novelist. In his pattern of imagery, Keller exploits depth of field for maximal effect. In describing objects, he often describes their backgrounds, too. Here’s Keller writing about Henry’s beloved “standing in a bed of flowers whose tall stems and crowns stood out with Anna’s head against the deep blue sky.” And here’s a stronger example from a pleasant scene later in the novel, “The mist was clearing, one could see the blue sky through its silver veil, isolated rays of sunlight fell shimmering upon the moist branches and made the drops glitter as they fell, detaching themselves on by one.” Keller shifts from mid-ground (clearing mist) to background (blue sky) to foreground (rays of sunlight, moist branches, etc.) as though his gift for representation were the easiest thing in the world.

This entry was posted on Wednesday, February 1st, 2012 at 10:54 am and is filed under Keller, Gottfried. You can follow any responses to this entry through the RSS 2.0 feed. You can leave a response, or trackback from your own site.

3 Responses to why gottfried keller paints such excellent books