One of the effects of reading Molloy is to despair of language. To sense, sometimes dimly, sometimes sharply, that words are as futile as acoustic blasts, emanating from this or that orifice. If you don’t feel this upon reading Molloy, you haven’t read Molloy. I don’t mean this or that idol of Molloy. I mean the real McCoy. Sorry, excuse me. A little gas. A glass of wine on an empty stomach produces an excess of language.

I am Molloy. Or Mollose. Or Moran. Or even Louse. Anyway, it doesn’t matter. You see, I’ve read Beckett’s novel (or is it mine?) and have ingested its central image and metabolized its artistic intent. A journey from A to B is really only a journey from A to A because all journeys end up where they started.

Get this. I started Molloy, abandoned it after one paragraph, picked it up again, read the whole damn thing. Finished it only to start it again, and then threw the infernal nest of words into the corner, where they writhed for a moment,  before I buried my hands back into the hive to read the figures I would find there dancing like bees. I’m telling you, they moved up and down, and all around.

A start that is a finish, and a finish that is a start. Beckett is feeling downright plucky, to be sure.

Something speaks, I know that much is true. It could be Molloy or Moran or Beckett or a bunch of insects. I’m just not sure what it is yet. As I said, I despair of language. And that’s why I turn to the things themselves in a good Kantian empirical sense.

To hell with words. Wait, not quite. To hell with only words. Yes, that’s more like it. To wit: “The shadow in the end is no better than the substance.” These words look something like this on Plato’s cave. A cool engraving. Handsome even.

And this, too, “Through the lofty window I saw boughs. They rocked gently, but not all the time, shaken now and then by sudden spasm. I noticed the chandelier was burning.” A less cool engraving perhaps. But it captures the gist, I think. Charming trees there in the background, Quaking Aspen in the Wasatch range. Really, no tree matches their serene mutterings. I know this from experience. 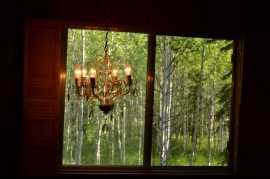 More on Molloy later. Using only words unless I’m pykk’d. Wish me luck!

This entry was posted on Wednesday, July 10th, 2013 at 7:04 pm and is filed under Beckett, Samuel. You can follow any responses to this entry through the RSS 2.0 feed. You can leave a response, or trackback from your own site.